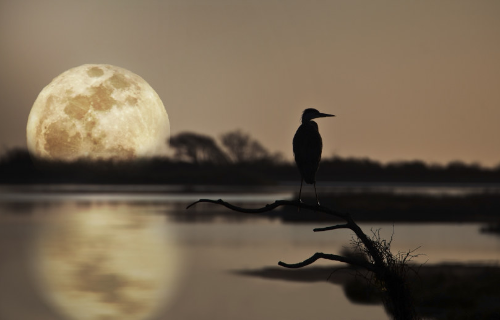 THE FULL MOON AND TURNING POINTS

Most of us are living in an era, and in circumstances that mean we ignore the cycle of the Moon, from the sliver of a crescent that follows the New Moon to the luminous smile of the Full Moon, about two weeks later. While, once this cycle was noted in ritual, at home and in places of worship – and still is in some cultures – that tradition and the accompanying lore have been largely lost.

In fact, often, those who live in densely populated urban areas are so busy that it never even occurs to them that the Moon is full, and even if they were aware of it, they couldn’t see it. Being unable to enjoy this glorious sight, and the visually stunning link to nature that it is, constitutes a real loss. Yet, even if the moon can’t be seen, and nobody discusses its cycle, it cannot – and should not – be ignored. This most fundamental of cycles, links with a range of events here on the earth. First, of course, are the tides.

This applies not only to the daily rhythms of the seas, but those extremely high tides associated with certain lunar cycles and seasons of the year. That’s not all. The ancients planted and gathered their crops and handled their livestock according to the Moon, a system that is today usually termed biodynamic farming. This method suggests times for setting out planets that grow above or below the ground, based on the Moon’s sign and is extensively employed in Europe, and in the parts of the countryside, these ancient ways were never lost. During the two weeks period between the New Moon and Full Moon there’s an increase in cell growth.

A farmer, one of whose enterprises involves fermenting fertilizer in temperature controlled vats, reported to me that the fermentation process accelerates so much, and creates so much more heat in the run up to the Full Moon, that he actually has to lower the thermostat. Knowing that, it should be no surprise that astrologers who study trends in the world’s stock and commodity markets carefully observe the lunar cycle, and their predictions are stunningly accurate. Ironically, often those who observe the lunar cycle in the worlds of nature and business still don’t pay much attention to its influence on their own lives – and mood. In astrology the Moon symbolises the link to the physical mother and nurturing, especially in childhood, and later in life, to the individual’s ability to nurture themselves. In an individual’s birth chart, the Moon’s position – by sign and house – reveals that person’s emotional nature and stability as well as their capacity for intimacy. In this era during which we pay far more attention to what we earn and own than to our inner world or feelings, many are profoundly unaware of their own emotional nature.

So when the Full Moon brings those feelings to a peak, as it does every twenty eight days, and suddenly elements of life reach crisis point, they – and everybody else – tends to blame events around them for the tensions they’re experiencing. But they don’t necessarily pause to consider whether the heightened feelings that accompany every Full Moon might not have contributed to that crisis. Instead, they’ll be an almighty blow up with, possibly, one party saying they “can’t take it anymore,” and walking out.

The Full Moon is a time of extremes, emotionally and otherwise. Sometimes those dramas lead to the serious discussions that should have taken place anyway, and to a more rational decision. What’s more, many forget is that every crisis contains within it the seeds of a new cycle. This means that, after the intensity and heat of the Full Moon, comes a period of contraction, reflection and increasing stillness. A time to consider what came the Full Moon’s emotionally fuelled revelations brought to light, one that concludes with the New Moon, two weeks later, when the cycle begins anew.